WEST JORDAN, Utah, Dec. 21, 2020 (Gephardt Daily) — Police are investigating what began as a shoplifting incident and ended with a man being transported to the hospital with serious injuries Monday evening.

They are hoping the public can help identify the suspect, seen in the photo above.

“A younger man, probably in his 20s, went into Smokeys smoke shop and took some product, maybe a handful of vape cartridges,” Sgt. Holt, with the West Jordan Police Department, told Gephardt Daily. “A worker went into the parking lot to retrieve the product.”

A tussle ensued in the parking lot and the thief was able to get into his vehicle, which he then used to run over the 28-year-old male clerk, Holt said.

The clerk was transported by ground ambulance to the hospital, where he is in critical condition.

The police are following some leads as they work to identify the suspect, who fled in a red passenger car. He is described as a white male with shaggy-style hair, white pants, tie-dyed shirt, black jacket, and a black hat. He was wearing a black mask.

Anyone who recognizes the suspect, or who has any information about the incident, is asked to call West Jordan police at 801-840-4000. 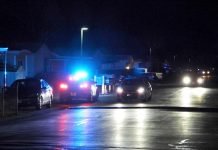 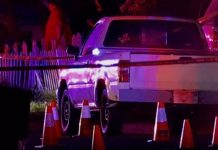