A small compact car, southbound on Highway 89, was making a right-hand turn onto Old South Main.

“The driver of the car made a totally proper right-hand turn,” Foster told Gephardt Daily. “They saw the motorcycle coming at them.”

The motorcyclist laid down the bike on the road and slid into the car.

“He continued sliding after the impact with the vehicle, and the motorcycle kept going farther,” Foster said.

The 21-year-old male motorcyclist was deceased when emergency crews arrived.

Foster said the speed the motorcycle was traveling isn’t yet known, and the accident could be “potentially weather-related.”

“The motorcycle, the rain, the wet asphalt — it’s not a good combination,” he said.

The female driver of the car and her female passenger were “very cooperative and helpful,” Foster said. He added that he was glad officers called the women’s family members to come pick them up because the women were so shaken by the incident.

The name of the motorcyclist is being withheld pending notification of next of kin.

Springville woman dies in crash with semi in Idaho 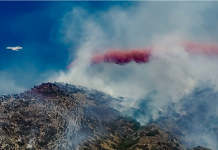 Update: Round Peak Fire in Utah County at 267 acres, 5% contained