WEST JORDAN, Utah, Nov. 28, 2020 (Gephardt Daily) — A West Jordan woman faces two felony charges after police say she used a bow and arrow to shoot a boy on street level from the roof of her residence.

“There was initial reports of possibly a firearm, a knife, or even a bow and arrow,” WJPD Sgt. Adam Julian told reporters at the scene as the investigation was getting underway.

“We arrived. We did locate a victim that was down the street from the residence that did have a wound to his leg area. It was fairly significant. He is currently at Jordan Valley (Medical Center) now in stable condition.”

Officers saw the female on the roof, but she re-entered the house and subsequently came out with her hands up, Julian said. Several arrows were seen sticking up from the lawn.

A probable cause statement filed by a West Jordan officer picks up the story.

“I made contact with a juvenile victim who had a large laceration to his left leg,” the statement says. “The juvenile victim stated he was shot by a bow and arrow by the adult suspect.”

Witnesses on scene told officers the woman was on the roof of her residence when she and the male juvenile got into an argument.

“Witnesses stated the suspect had a rifle and handgun with her while she was on the roof, pointing at the juvenile victim,” the statement says. “The witness stated she witnessed the victim get hit with something, but did not hear any gunshots. The witness observed the juvenile male was bleeding from the leg. It was found the juvenile victim was shot in the left leg by an arrow by the female adult suspect, causing serious bodily injury.

“Witnesses heard the adult female tell the juvenile male to not come back or she would kill him,” the statement said. 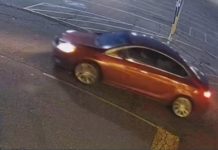