PRICE, Utah, Feb. 7, 2021 (Gephardt Daily) — A Price woman who caused an Amber Alert to be issued last month has been arrested on child endangerment charges.

A probable cause statement from the 7th District Court of Carbon County said Jacqueline Gardner, 38, is facing three charges of endangerment of a child or elder adult, a third-degree felony.

On Dec. 30, officers received an anonymous tip regarding a baby that had been born at home to avoid any tests being done that might reveal drug use in the mother, the statement said. There were also concerns the mother was breastfeeding the baby while still using drugs. The information report claimed the baby had been born between three to five weeks prior to the report being called in.

Officers were able to make contact with Gardner at her residence and confirmed she had delivered a baby girl at home on Dec. 9, the statement said. At that time, there were no obvious concerns of drug use observed in the house, and the Division of Child and Family Services was notified.

“Over the next month, DCFS began looking into the allegations and requested a drug test on Jacqueline which she complied with,” the statement said. “The initial test given was a urine test which showed positive for methamphetamine and amphetamines.”

A hearing was held through the 7th District Court on Jan. 14 at which Gardner was ordered to turn her three children over to law enforcement. An Amber Alert then was issued by the Price Police Department after Gardner and her sister left in a vehicle with the suspect’s infant daughter, according to court records. Both Gardner and her sister were charged with child kidnapping, a first-degree felony.

The test conducted was a hair follicle test, which shows drug use for up to 90 days prior to the date of the tests being conducted, the statement said. The two older children were given the test on Jan. 21; both of these test results showed a positive result from methamphetamine. The youngest child was given a urine test, which showed a negative result. Gardner’s hair follicle test showed a positive result for both methamphetamine and amphetamines. The 90-day period involved with the test showed the suspect was using methamphetamine and amphetamines during the time frame when she gave birth to her youngest daughter. It also shows her other two children were exposed to methamphetamine during the same time frame.

“A follow-up interview with Jacqueline was conducted where she admitted to using methamphetamine to self medicate due to the death of another of her kids,” the statement said.

Gardner was ordered to be released on her own recognizance. 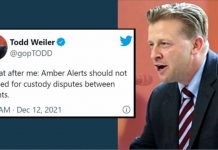