Cannon said the man had rented gear from the company, which provides rafts, tubes and life jackets to those who are floating on the Provo River. The company requires either an ID or keys from each group that rents items, which are then held as collateral.

The man returned without all of the gear he had rented, Cannon said.

The man then said something to distract the proprietor of the company, Cannon added, and when the proprietor went to check on what the man had pointed to, which took about 10 seconds, the man allegedly stole the box containing around half a dozen sets of car keys and customers’ IDs.

Cannon said police think the man was attempting to get his own item back, but he stole the whole box.

“That means that everyone was inconvenienced,” Cannon said. “It’s not only a selfish act, it’s a criminal act. Our hope is he only wanted his item and he will dump the rest of the box.”

Officials were able to assist other customers with getting back into their cars, and most had spare keys.

Cannon said the name that the man gave does not match any driver’s license in the state of Utah, and the suspect vehicle’s license plates also do not match up with the name he gave.

The only information officials have about the suspect at this time is that he was driving a white passenger car.

The Utah County Sheriff’s Office is asking that anyone who has any further information about the incident, or finds the box, contact officials on 801-851-4000. 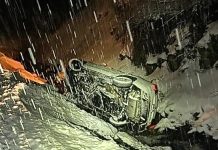