The four were in a small, fixed-wing plane piloted by Steve when it went down shortly after takeoff from the Cedar City Airport in a wooded area near State Route 14, near the mouth of Cedar Canyon, east of Cedar City.

Smoke rising from the crash site Saturday was seen at a distance and initially thought to be a wildfire.

“Upon arrival, Sheriff deputies… discovered the burning remains of a downed aircraft,” a statement from the Sheriff’s Department says.

“Paramedics from Gold Cross Ambulance, Cedar Fire personnel and members of the Iron County Search & Rescue were dispatched, and arrived on the scene to assist.”

The pilot and three passengers of the 2004 Diamond DA-40 aircraft were found deceased.

People are remembering Steve Eatchel on the UCSO Facebook page.

“Devastating. He was a wonderful deputy, always so nice to talk to,” one poster wrote.

“He was such a great person! This is so sad to hear. Their 4 kids. RIP ‘etch a sketch,'” wrote another.

“He was absolutely so kind and very non judgmental in his work he treated everyone with respect,” another wrote.

“So sad,” said another, apparently referring to Lindsay Eatchel. “She was one of the leaders in my daughter’s girl scout troop. She will be missed.”

“Deepest condolences to his blood and Blue families. Godspeed, brother. Thank you for your many years of dedicated public service,” wrote another.

Several other posts shared condolences to the department for its loss. The other victims did not have employers who were as well known, but are being mourned by family and friends. DeAgostini’s father received hundreds of condolence posts after he announced his daughter’s death.

GoFundMe pages have been established to help the Eatchels’ four young children and to help with the funeral of Tom Eachel. See the post for the Eatchels’ children here, and for Tom Eatchel here. An account for DeAgostini can be viewed here.

The investigation into the cause of the crash is still underway. Gephardt Daily will have more information as it becomes available. 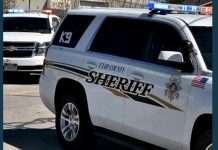