On Christmas Day, a grateful public showed their appreciation for Pavia’s work when they voted for him as “Utahn of the Year” in the Salt Lake Tribune’s annual reader poll.

As chief of the Division of Pediatric Infectious Diseases at University of Utah Health and director of epidemiology at Intermountain Primary Children’s Hospital, Pavia is known worldwide as an expert in vaccine-preventable illness.

Since the pandemic arrived in 2020, Pavia has gained a much-appreciated reputation among Utah parents for providing them with the medical information they need to know to best protect their families, friends, and their communities.

Earlier this week, in an interview on the Bill Gephardt Show Podcast, Pavia spoke bluntly of dark days ahead, when another wave of unvaccinated patients will fall ill to the Omicron variant and overrun Utah’s already depleted corps of exhausted and demoralized medical workers.

“I’m very worried about the next four to six weeks. I think we’re in for a world of hurt,” Pavia said.

“It’s been just under four weeks that we’ve known about this variant and I think that all of us in healthcare are burned out. We’re frustrated, we’re incredibly tired and we’re facing what’s likely to be another huge surge with a lot of evidence that the population at large and our political leaders are not prepared to do very much. So it’s a very difficult time for many of us, and particularly for my colleagues in ICUs and emergency departments.”

While Pavia feels a second surge is inevitable, he says there are things people in Utah can do to mitigate their risk of infection by using a “layered” approach to COVID protection.

The first layer of defense is to become fully vaccinated, including boosters. The second is to double down on mask wearing and social distancing, especially in enclosed public settings. The third layer, Pavia suggests, is the use of rapid COVID testing and contact tracing.

While Pavia believes pill therapies announced this week by Pfizer and Merck show great promise, he says it will be months before there is a large enough supply to treat all those who will need them.

Pavia says vaccines are the best path forward in managing the pandemic, but they can be rendered ineffective if a large segment of the population refuses to get them, or to abide by any other health measures, such as mask wearing or social distancing.

“We’ve given 400 plus million doses in the United States. We understand the safety. It’s really safe. There are no microchips in it. It’s not going to alter fertility. It’s not going to have any ill effects during pregnancy. We really have gotten past the point at which it’s a new vaccine, where there were a lot of unknowns. It’s now one of the best studied, best understood vaccines that we have in terms of safety.”

To hear more of Pavia’s insights into Omicron’s arrival in Utah, check out the podcast above. 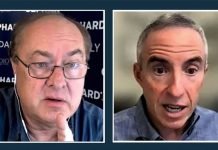 Bill Gephardt Podcast: Dire predictions for the unvaccinated by one of Utah’s top physicians, Dr. Andrew Pavia on the ominous spread of Omicron 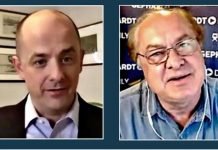