MOAB, Utah, Feb. 4, 2021 (Gephardt Daily) — A report of a person with an AR-15-style rifle at a Moab high school Thursday afternoon turned out to be a teen with an Airsoft gun, officials said.

“At approximately 3 p.m. officers were dispatched to the Grand County High School on a report of subject with an AR-15-style rifle in the parking lot,” said a Facebook post from Moab City Police Department.

The high school and Grand County Middle School  were both placed into lockdown, and officers arrived two minutes later.

“Responding officers contacted the subject and identified the rifle as an Airsoft gun,” the post said.

It was subsequently found the person with the Airsoft gun is a student at the high school.

“He and his friends were planning to play Airsoft games after school and he retrieved the Airsoft AR-15 from his home to be placed into his vehicle when he was observed by a passerby who called 911,” the post said. “At no point did the student threaten anyone with the Airsoft.”

The student was issued a citation for disorderly conduct and disruption of activities in or near a school building.

“We applaud the passerby for being alert and notifying dispatch of a potential threat,” the post said. “Unfortunately, these situations cannot be taken lightly.” 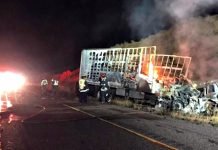