The Andrew Lloyd Webber/Tim Rice rock musical covers the Passion — the last anguished days of the life of Christ, ending with his horrific crucifixion — with searing electric guitar solos, soaring vocals from a Jesus with swagger and a partially shaved head with man bun, and with an occasional mic drop.

The touring production of “Jesus Christ Superstar,” directed by Timothy Sheader and brought in by Zions Bank/Broadway at the Eccles, plays at the Eccles Theater though Sunday.

Aaron LaVigne stars as a conflicted Jesus, with followers not always understanding his message, and with the knowledge that his time is short. LaVigne reveals the guarded character through his interactions with others, and builds to his heart-rending “Gethsemane,” through tenor vocals that range from deep and smooth to  gritty and growly. His voice is his instrument, and he’s a master musician.

Costaring as Judas, who communicates more directly with the audience and moves the story forward, is Omar Lopez-Cepero. Judas is critical of some of Jesus’ actions, and offered advice is not heeded, causing a rift and increasing anger. Lopez-Cepero is a solid singer who may have missed a couple high notes, but his portrayal makes Judas a multi-dimensional character.

Rounding out the power trio is Jenna Rubaii as Mary, who sings sweet and soothing solos including “I Don’t Know How To Love Him.” It comes across as almost a country ballad, a soothing balm after some of the harder-edged songs sung with angry, piercing falsettos.

And a lesser character with standout charisma is Paul Louis Lessard as Herod, played in a glittery, over-the-top costume, and with gaudy flamboyance and overflowing sarcasm that made the drama-weary audience burst into laughter.

The multi-level set, which elevates an 11-piece band, is spare, and looks like it is made from weathered I-beams. Frenetic dancers serve as followers, and help keep the energy high. Moving beams of lights enhance the Superstar experience, and occasionally assault the audience.

It’s a high energy, raucous musical for fans of screamy rock, melodic ballads and a mix of other musical styles, with high drama and irreverence.

“Jesus Christ Superstar” is here on a short run, with just five more shows between Thursday and Sunday. It runs about 95 minutes, with no intermission. For ticket information, click here. 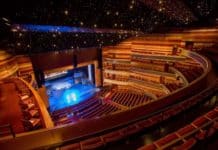 Broadway at the Eccles announces next season of shows 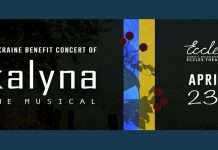 Performance of ‘A Ukraine Benefit Concert of Kalyna: The Musical’ one night only at Eccles Theatre