This touring production, playing through Sunday at the Eccles Theater, feels like actual Broadway rather than just a tour. The acting is both intimate and powerful.

The musical — based on Giacomo Puccini’s opera “Madame Butterfly,” but set in the 1970s Vietnam — shares the story of Kim, a newly orphaned teen with a pure heart, and Chris, a weary American G.I. who has found only ugliness in Vietnam.

That is, until he spots Kim on her first night as a bar girl at a gritty establishment that also offers gyrating, bikini-clad call girls. The dance number between the call girls and soldiers features sex-inspired moves.

Kim is designated as “a princess,” whose virginity is set to be auctioned off. This musical is geared for mature adults who can handle disturbing material, set in a disturbing time and place.

Chris (actor Anthony Festa) defends the timid Kim (Emily Bautista) against groping or worse from his soldier buddies, and the two leave to find solace together. Soon, they are a couple, but become separated when Saigon falls, American troops withdraw, and North Vietnam regains control of South Vietnam.

The staging for this production is dramatic and exhilarating to see. The dramatic lighting — especially the fan-shaped rays of lights slicing across the stage from various angles — visually reinforces the feeling of a world in conflict.

Depending on the scenes and characters, the well-executed costumes are bare and bawdy, ornate and majestic, military or peasant plain.

And the helicopter scene, for which Boublil and Schonberg’s “Miss Saigon” is famous, will not disappoint.

Bautista has a beautiful, pure voice, and makes it easy to empathize with the steadfast Kim. Festa’s voice works better in some songs than others, but in most, his tenor voice shines.

In some group songs, the lyrics are hard to understand due to enunciation issues, but that’s less of a problem after the early scenes of the show.

Other standouts in the cast are Red Concepcion as the highly entertaining and resourceful Engineer; J. Daughtry as a wild soldier who goes on to recognize his responsibility and try to make amends; and Jinwood Jung as Thuy, a man who wants to make Kim his own at any cost.

It’s an amazing and intoxicating production that draws attention to multiple social issues we still struggle with today. If you know the story, you will know not everyone gets a happy ending, but you will leave the theater moved and maybe even changed.

The Eccles Theater is at 131 Main St. For more information about the theater, the production or available tickets, click here. 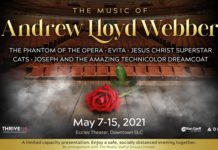 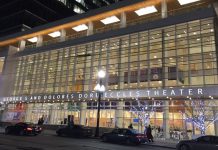