VIRGIN, Utah, Sept. 2, 2018 (Gephardt Daily) — Officials are offering a reward of up to $3,000 for information leading to the prosecution of those responsible for introducing three illegally stocked fish species to Kolob Reservoir.

The Utah Division of Wildlife Resources said in a news release on Facebook that officials recently discovered the three species– yellow perch, green sunfish and bluegill — that pose a “substantial threat” to the endangered fish species that live downstream in the Virgin River.

“As a result, we will be draining Kolob this fall and treating it with rotenone to remove all fish,” the news release said.

Rotenone is a naturally occurring chemical found in the roots, seeds and leaves of several subtropical plants and has been commonly used as a piscicide, or fish killer.

The news release said a reward of up to $3,000 is being offered for details that lead to the prosecution of those responsible for illegally introducing fish to Kolob.

Anyone who has information about the illegally introduced fish is asked to call the Utah DWR UTiP hotline at 1-800-662-3337. 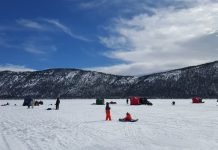