SEVIER COUNTY, Utah, April 9, 2019 (Gephardt Daily) — A Richfield woman is facing two counts of aggravated assault after she allegedly stabbed a man in the neck Monday.

The suspect has been identified as Alyssa Gentry, 31, and the victim as David Smalley, 34, also of Richfield, said a news release from the Sevier County Sheriff’s Office.

“It is believed both subjects had a knife as they were arguing,” the news release said. “During the argument the female struck the male in the neck with a knife causing a serious life-threatening injury. The male began losing large amounts of blood.”

The man got into the woman’s car and she drove towards town while dialing 911. Deputies, Salina City officers, Utah Highway Patrol troopers, and emergency medical technicians began responding to the area. Salina City Chief Al Taylor was first on scene in Aurora and began to immediately provide life-saving medical care until other deputies and emergency medical technicians arrived.

“The two subjects both were claiming the other attacked first, and claimed self-defense,” the news release said. “As the evidence was gathered at the scene and based on the statements of the subjects, the female appeared to have been the aggressor.”

The man was flown by medical helicopter to Utah Valley Hospital in Provo for treatment of the injuries. Sevier County deputies and detectives served several search warrants during the process of evidence gathering and are still following up on the evidence found.

Both the suspect and the victim have recently been homeless and living out of their vehicles, the news release said. Evidence of drug use was also found. 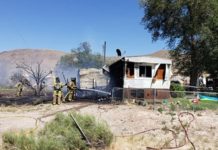