RIVERDALE, Utah, Aug. 24, 2019 (Gephardt Daily) — An early morning fire at the Riverdale Village mobile home park displaced two residents, who escaped the structure after their dog jumped on their bed to alert them to the flames.

The dog did not make it out, Captain Matt Hennessy, Riverdale Fire Department, told Gephardt Daily.

Crews were alerted to the fire at about 3:45 a.m., Hennessy said. Besides the Riverdale Fire Department, crews from Ogden, South Ogden and Roy responded to battle the scene, near 4375 S. Weber River Drive.

“The report came in of smoke and flames,” Hennessy said. “When we arrived, we found 50% of the mobile home involved. Within about 20 minutes, we had the fire controlled.”

Hennessy said the occupants reported they were asleep when the fire began.

“Their dog started jumping on the bed and alerted them. Unfortunately, the dog did not make it out of the structure.”

One of the residents was assessed at the scene for smoke inhalation and was released.

The residence is a total loss, Hennessy said. The occupants, estimated by the captain as being in their late 30s or 40s, were being assisted by the Red Cross to find a place to stay.

Hennessy said the cause of the fire is unknown and is being investigated by the Riverdale Fire Marshal. 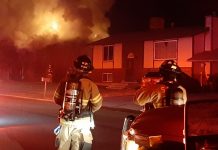