ROY, Utah, June 19, 2022 (Gephardt Daily) — Roy City Police say a wrong-way driver was taken into custody Sunday morning after he was stopped driving west in an eastbound lane, and showed signs of driving under the influence.

An officer of the RCPD officer noticed the vehicle at about 5:50 a.m.

“A Roy City Officer, who had just signed on for his shift, was westbound on Riverdale Road at about 1100 West, and observed a vehicle traveling westbound in the eastbound lanes,” the statement says.

“The Roy City Officer attempted to stop the vehicle, which failed to yield, until finally stopping at 1900 West.

“The adult male driver had open containers of alcohol and exhibited signed of impairment and was taken into custody for suspicion of DUI and other traffic violations after failing FSTs (Field Sobriety Tests).

“The traffic stop did cause some traffic delays at 1900 West and Riverdale Road.” 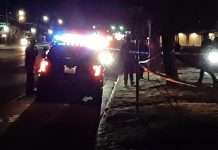 Update: Officials ID man, woman killed in crash on I-80 in Tooele County