ROY, Utah, July 31, 2022 (Gephardt Daily) — Several officers responding to a report of a “family disturbance” at a Roy residence Saturday night found themselves in the thick of a domestic violence situation — and one of the involved parties wasn’t about to give up.

Roy Police Sgt. Taylor said officers arrived at the home around 9 p.m. Inside were a man and a woman, believed to be married but separated, and the woman was not in a good mood.

“She bit one officer, but didn’t break the skin, fortunately,” Sgt. Taylor said. “Then she scratched another officer, and kept kicking the other officers as they were arresting her.”

The man was not arrested and no charges will be filed against him, Taylor said. 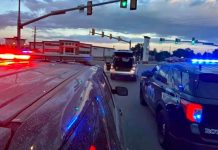