WENDOVER, Utah, March 11, 2020 (Gephardt Daily) — A Roy man was arrested after Wendover police say they made a traffic stop and found illegal narcotics in his possession.

Henry Tran, 33, was taken into custody after officers “conducted an investigation of illegal narcotics on a traffic stop at the 100 block of Wendover Boulevard,” a press release from Wendover Police Department said Tuesday night.

According to the press release, a narcotics detection K9 named Maverick indicated the presence of drugs during the traffic stop.

Tran has been charged on suspicion of possession of methamphetamine and drug paraphernalia. 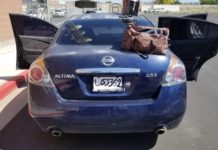