ROY, Utah, April 16, 2019 (Gephardt Daily) — Roy police stopped a vehicle that was being driven “strangely” early Tuesday morning, and quickly discovered the reason why: the driver had two gunshot wounds to the legs.

Roy City Police Department Detective Josh Taylor told Gephardt Daily that officers made the traffic stop just before 4:15 a.m. in the area of 5600 South and 3500 West, and the driver pulled into the ambulance entrance of the Weber Campus of Davis Hospital.

“The man was driving strangely, I’m not going to say erratically, but officers were concerned and stopped the vehicle for a number of traffic violations,” Taylor said. “They could immediately see a lot of blood inside the vehicle and found the driver had two gunshot wounds to the legs.”

The officers applied a tourniquet to control the bleeding and an ambulance transported him to a nearby hospital. They didn’t take him right to Davis Hospital, Taylor said, because it is a stand-alone emergency room and they needed to get the man to a hospital that treats gunshot wounds.

Taylor added that at this time an investigation into the incident is underway but officials don’t yet know where the shooting occurred or who was responsible. The events leading up to the shooting are also unclear at this time. 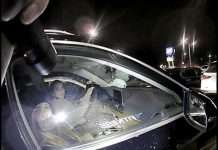