“Amberlee, who used a wheelchair and an alternative means of communication, was a frequent attendee of SLAC’s annual children’s productions prior to her passing in 2019,” the news release said. “Because the theater company’s 130-year old building; a former LDS ward house, did not feature an elevator, Amberlee’s mother, Shauna, would bring several people with her to carry Amberlee into SLAC’s Upstairs Theatre each year.”

When Hatton-Ward passed away, SLAC began conversations with her mother to determine a means for the theater company to memorialize Hatton-Ward by eliminating the barriers present in its building.

Through The Amberlee Fund, SLAC has engaged fellow local nonprofit ASSIST Inc Community Design Center, the news release said. The design firm analyzed SLAC’s physical space with the aim of reconfiguring the theater in a manner that accommodated a 21st century elevator in a 19th century building, the news release added. When the theater re-opens later this summer, patrons will find a remodeled lobby and box office area. An all-new accessible restroom will be located on the lobby level, with newly-configured restrooms on the lower level of the theater. The dressing room facilities, housed in a former LDS Relief Society building built in 1908 and located on the property, will also receive a major renovation.

“For far too long, patrons in need of physical assistance have graciously accepted our historic building’s shortcomings. However, as SLAC forges ahead to make our company as inclusive as possible, we would be remiss to not address the physical limitations of our current setup once and for all. We invite SLAC’s community to join us in honoring the legacies of Amberlee Hatton-Ward, as well as Linda and Don Price, by making our dreams of fully meeting the needs of some of our most treasured patrons — and hopefully some new faces — a reality at last.”

To unify and modernize the building’s common areas, SLAC turned to real estate and interior design firm, cityhomeCOLLECTIVE. Lauren Bald, cityhomeCOLLECTIVE’s design director, said: “SLAC is a bold organization, with a vibrant and thought-provoking repertoire and a pretty open-minded audience. They’re our kind of people.”

Cityhome Senior Designer Brea Valenzuela gave some hints of what will be revealed upon re-opening.

“Expect lots of color, unexpected moments of surprise, and plenty of opportunities to interact in the public areas.”

In addition to physical improvements, SLAC is also currently undergoing a major website redesign in collaboration with Third Sun Productions, the news release said. The redesign aims to provide improved accessibility for those with visual and auditory disabilities. The new site is expected to be unveiled later this summer, to accompany the unveiling of SLAC’s 50th Season lineup.

While SLAC announced an earlier iteration of an accessibility fund last May, the theater describes that as a soft-launch period. Those funds will still be allocated to the The Amberlee Fund, however as part of the capital campaign, the funds will now be matched up to $500k through the support of the Linda and Don Price Legacy Fund.

“When we were forced to cancel our spring and summer 2020 productions, we offered all ticket holders the option for a full refund, a gift certificate, or the opportunity to donate to our future accessibility plans,” said Fleming.

“We were so touched by the outpouring of support for the initiative and we’re thrilled to roll those donated funds into this capital campaign, which is essentially meeting the same, equitable goal — but now with twice the impact thanks to the Linda and Don Price Legacy Fund.”

On top of the $500k match and patron ticket donations, members of the SLAC team, as well as the campaign’s committee members, have been in a period of individual outreach — offering naming rights to various areas of the theater. Thus far, more than $775,000 of the intended $1 million goal has been raised, SLAC officials said.

Construction is currently underway for a summer 2021 completion date, as the theater company prepares to open the world premiere of its production, #SLACabaret.

Those who would like to contribute to The Amberlee Fund can do so by visiting SaltLakeActingCompany.org/Donate or by calling 801-363-7522. 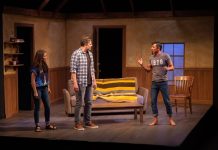 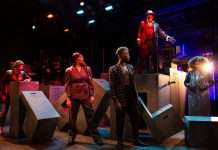