SALT LAKE CITY, Utah, April 22, 2019 (Gephardt Daily) — A Salt Lake City man was arrested Sunday after he allegedly pulled out a handgun and racked the slide during an altercation with his neighbors over a temporary shade barrier.

A probable cause statement from the Third District Court of Salt Lake County said Jay K. Norwood, 56, is facing charges of aggravated assault, a third-degree felony, threat/use of a dangerous weapon in a fight, a class A misdemeanor, assault, a class B misdemeanor assault and intoxication, a class C misdemeanor.

“A dispute was reported between neighbors at a section of apartments in Salt Lake City,” the statement said. “The suspect, Jay Norwood, had been consuming alcohol and was in possession of a black handgun. Jay confronted neighbors outside in a common area where Jay was upset about a temporary shade barrier that had been erected.”

The dispute was recorded on cellphones by two separate victims, the statement said. During the argument, Norwood was agitated and the neighbors asked what he was going to do. Norwood stated, “I think I’m gonna decide right now” as he pulled the handgun from the back of his pants waistband, racked the slide of the handgun and began waving it around in a threatening manner.

“Clear video evidence captured Jay’s actions and the fact he was in physical possession of the handgun during the incident,” the statement said. “Jay saw that a neighbor was capturing video with a phone, so he pushed the phone in an aggressive manner with his free hand. This push caused the phone to hit the victim in the face, which pushed her head backwards in a jerking motion.”

Norwood had the handgun out for a short period before the neighbors convinced him to put the gun away. He finally agreed and tucked it back into the back waistband of his pants.

When officials arrived, Norwood voluntarily admitted he had consumed wine during the day and that he understood what was occurring, the statement said.

“In addition, I detected a strong odor of alcohol coming from Jay’s person during our interaction, although no test was completed to verify his level of impairment,” the arresting officer wrote. “Jay invoked his Miranda rights to remain silent and denied a search of his residence.”

A search warrant is being drafted to locate and retrieve the handgun seen in the video and by the victims.

Norwood was booked into the Salt Lake County Jail with his bail set at $7,500. 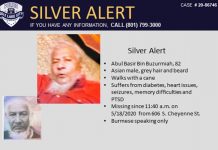 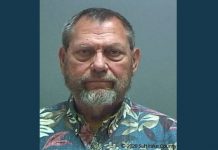