CANCUN, Mexico, March 25, 2016 (Gephardt Daily) — A West Valley City man died while snorkling on Wednesday during a vacation with friends in Cancun, Mexico.

Dariusz Sulich, known by friends as Darek and originally from Poland, was snorkeling when he was suddenly swept under by a current. CPR efforts were made to save his life, but he did not survive.

Sulich, a former Olympic wrestler, was an employee of Sandy City Parks and Recreation, and his co-workers are still trying to cope with his loss.

“I always looked forward to him coming into the office. He worked here for 12 years and I always loved hearing his accent,” co-worker LeAnn Earl said. “I knew he was a great guy but after hearing other friends here at Sandy City talk about him, it is apparent he was a really great guy to everyone.”

Carl Ford, also a co-worker and friend of Sulich’s for 27 years, said Sulich moved to the United States many years ago and eventually was able to bring his mother and step-father here so he could take care of them. Sulich’s mother only speaks Polish, and he bought a home just down the street from his parents so he could always be close in case she needed help.

He is remembered for being a loving family man, a great cook and a perfectionist. As an irrigation crew leader, Ford said Sulich would never leave a job unfinished or not done right. Sulich also had dreams of one day opening up a sandwich shop where he could share Polish traditions.

Ford and Earl both said Sulich was so excited to be going on this vacation and that he talked about it all the time. It was his first one in 30 years.

Sulich leaves behind many friends, family and his three children, Aska “Joanna” Sulich, and two sons Krystian Sulich and Brandon Sulich who all live in the Salt Lake Valley.

A GoFundMe account was shared on a Salt Lake Law Enforcement Facebook page to help the family bring Sulich’s body back from Mexico. Sulich’s son Brandon is currently an officer with Unified Police Department. 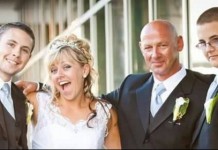