Following the news Jan. 17 that the Salt Lake Bees intend to leave Salt Lake City in 2025 for a new ballpark in South Jordan’s Daybreak community, Mendenhall shared plans for a $100 million public-private investment in the Ballpark neighborhood involving the city, the Larry H. and Gail Miller Family Foundation, Zions Bank and Intermountain Healthcare as founding partners.

“There has never been an investment like this in our city before,” the mayor said. “This transformative commitment of human-centered programs and opportunity will bring tremendous leverage to the concepts being generated right now in the City’s Ballpark Next competition. Investments could include programs like affordable early childhood education, workforce training, building economic stability, recreation and so much more.”

Mendenhall’s fourth State of the City address was held at Woodbine Food Hall in the Granary District, where she touted the capital city’s energetic governance and readiness to capitalize on major opportunities.

“I’ve said it before and it’s worth stating again: The character of this city isn’t created through the successes and challenges we face together. It’s revealed,” Mendenhall said. “That character is powerful, creative, tenacious and caring. There’s no stopping us. We are bold. We are courageous. We are Salt Lakers, and we are ready. The state of our city is ready.”

The mayor also announced conservation efforts for the Great Salt Lake and details of a new 20-plus year airport use agreement with Delta Air Lines at Salt Lake City International Airport.

She praised city water users for saving 3 billion gallons last year and announced new efforts the city will undertake to ensure the resource’s longevity, including:

“History will judge us for the choices we make and don’t make right now,” Mendenhall said. “I will not sit back and watch the Great Salt Lake turn to toxic dust. We will not put our feet up and say, ‘We’ve done enough.’ 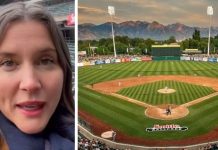