Dispatch received multiple calls at about 8:42 a.m., including reports of a mangled SUV. Officers responded to the scene, at 800 North and 300 West.

“Gold Cross Ambulance transported the driver to the hospital with non-life-threatening injuries. The driver of the semi-truck was not injured.”

Both drivers are cooperating with the investigation, the statement says.

“Based on the preliminary information, officers believe the driver of the blue SUV, while traveling southbound on 300 West, lost control and crashed into the semi-truck traveling northbound.”

Officers suspect excessive speed is a factor in the crash. Both vehicles were extensively damaged.

“Fortunately, no one was seriously injured in this crash given how much damage there was to the SUV,” said Sgt. Mark Wian, SLCPD. “We would like to remind drivers to always drive safely and obey the posted speed limits. This crash could have been far worse.” 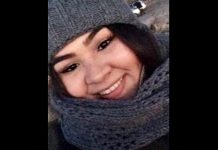