“The suspect vehicle in last night’s hit and run at 1790 S. State St. has been located,” says an SLCPD tweet issued early Friday afternoon. “We are still looking to speak with the driver. If you have any information about the driver please call 801-799-3000.”

A follow-up tweet said the vehicle was found near the accident site.

“The vehicle was located abandoned in a neighborhood a few blocks East and North from the initial scene. Detectives are actively working the case.”

Salt Lake City Police Lt. Carlos Valencia told Gephardt Daily at the scene Thursday night that the victim was crossing the street near 1790 South about 10:17 p.m. when he was hit by a white southbound Nissan hatchback.

Valencia said security cameras captured images of the Nissan in the O.C. Tanner parking lot shortly after the accident.

Police said at the scene that the hit-and-run victim was in extremely critical condition and not expected to survive.

Salt Lake City police have not provided an update on the victim’s condition, or released his name. 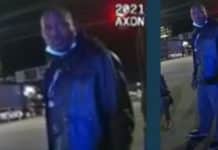