SALT LAKE CITY, Utah, April 30, 2019 (Gephardt Daily) — Salt Lake City police are searching for a suspect in connection with an armed robbery of a Domino’s Pizza.

The incident occurred at the Domino’s at 1228 S. Redwood Road on April 15, at 8:53 p.m., the Salt Lake City Police Department said in a Facebook post Tuesday.

“The suspect entered the Domino’s Pizza and threatened the clerk with a weapon, demanding money from the till,” the post said. “The suspect is seen arriving and leaving as the passenger in the pictured, white four-door truck.”

The suspect is described as a Hispanic male about 18 to 20 years old, with a tattoo on the left side of his neck.  Anyone who recognizes him or has information about the crime is asked to contact the SLCPD at 801-799-3000. The reference number in this case is 19-66157. 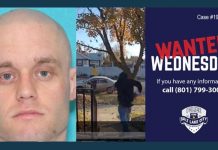