The protesters objecting to the construction of an inland port have shared concerns about increased traffic and pollution, and the complex’s potential effect on westside neighborhoods.

Read more about the protest event by clicking here, the activists’ response here, and the SLCPD’s subsequent news conference here.

Man in critical condition after motorcycle crash on Beck Street

Mayor Mendenhall stands by suspension of SLCPD K-9 unit after 18 ‘use of force’ cases are referred to D.A.’s office 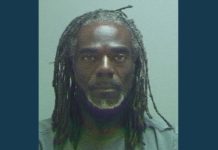