A news release from Wasatch County Sheriff’s Office at 4:30 p.m. said the boy was flown by Life Flight to Primary Children’s Hospital in Salt Lake City where efforts to revive him were unsuccessful.

The news release said that at approximately 12:20 p.m., the Wasatch County 911 center received a call stating there was a snowmobile crash near Mill Hollow Reservoir, which is about 24 miles east of Heber City.

According to an official on the scene, a family member using a snowmobile to jump a snow ridge struck the boy, who was seated on another snowmobile.

Wasatch and Summit Counties Search and Rescue Teams responded to assist in transporting their EMS crews into the remote area. The boy was then flown out.

The identity of the boy has not being released pending family notification. 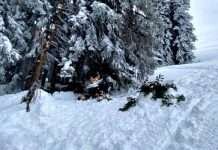