SALT LAKE CITY, Utah, March 6, 2017 (Gephardt Daily) — Patrick Michael McCabe, charged in the 1977 murder of 16-year-old Sharon Schollmeyer, was extradited from Florida to Utah over the weekend to face charges.

“(The) charges and this arrest are a significant step towards justice for the alleged victim, her family and the community in this nearly 40-year-old case,” said a statement from Gill’s office, adding that suspects are presumed innocent until found guilty in a court of law.

The District Attorney’s Office alleges that McCabe broke into Schollmeyer’s home, tied her up, raped her and killed her.

According to a probable cause statement, police were called to Schollmeyer’s apartment on Dec. 5, 1977, and found her nude body in the bathtub. Her halter top had been used to gag her, and a scarf was tied around her head, covering her eyes and nose. Pieces of rope and nylon stockings were found in the tub, which also contained about six inches inches of water. A butcher knife lay nearby, on the bath mat.

Police investigated with the tools they had at the time, which did not include DNA technology. The case went cold, waiting for science to catch up.

In September 2013, DNA from the recovered halter top was matched to an unknown DNA sample, according to the probable cause statement. In December 2016, the sample was matched to one from McCabe, now 59, who most recently resided in Bell, Fla.

The probable cause statement indicates that earlier this month, McCabe was read his Miranda rights, then admitted to using his key to enter Schollmeyer’s apartment, where he went to her bedroom and found her asleep. He used the knife to make the teenager cooperate, McCabe said, then he tied her up, raped her, took her to the tub, then strangled her and held her head underwater.

McCabe said he left the state five months later, and except for a single overnight visit, he never returned to Utah.

McCabe was arrested by Salt Lake City Police officers and local law enforcement officials in Florida, where he had served prison time in 1999 for a sexual offense against a minor. 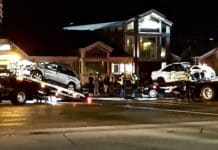