The effort will reduce convictions for more than 12,000 people; allowing those convicted of lower-level offenses, namely drug possession-related misdemeanors and felonies, to be eligible for automatic expungement in summer 2020.

The joint stipulated motion was signed at the press conference, and will now be submitted to the court.

For the last six months, beginning in April 2019, the Salt Lake County DA’s office examined some 100,000 cases, from 2015 to 1997, Gill said. Of those, 13,929 cases were identified which will impact 12,334 people. These individuals had prior histories that made them eligible for a one-step reduction of their convictions, and many of them also for a two-step reduction. A total of 7,639 separate criminal cases will be impacted by the joint motion for a one-step reduction, Gill said.

“The purpose of these reductions is to make more people eligible for automatic expungement,” Gill said. “This is the first of its kind in the country; legal defenders and prosecutors coming together to reform the system. Restorative justice requires us to strive to make those affected by crime whole, including offenders. Once you have paid your debt to society, you shouldn’t be held back.”

He added: “Having a criminal record is the modern day equivalent to wearing a scarlet letter. The promise of the criminal justice system is premised on the notion of rehabilitation. That is that when you have paid your debt to society, you’re welcomed back into a community of citizens. However, this is not what happens. The consequences of criminalizing what is a public health disorder, a substance abuse disorder or a criminal mistake, even after you have paid your debt to society continues to have disproportionate impact for many years if not for some for a lifetime.”

Gill said this creates barriers to the promise of our criminal justice system as one in three Americans have a prior criminal conviction. This affects employment, housing and education for thousands in our community, Gill said.

He added: “If we are going to have any meaningful reform, we must make sure that when you have paid your debt to society, these barriers must be also eliminated.”

Cases that were not deemed eligible included DUI, person-to-person offenses, weapon offenses, sexual battery, lewdness offenses and those involving domestic violence, following the Utah Legislature’s Clean Slate bill. The bill, House Bill 431, is an automatic expungement bill for eligible citizens who committed low-level crimes. Gov. Gary Herbert signed the Expungement Act Amendments bill at the end of March. The bill alters the current expungement process and will go into effect in May 2020.

“To those 12,334 individuals, we want to say thank you for doing your part, and it is now time to do our part,” Gill said. “You have paid your debt to society, and hopefully this will get you a little bit closer to getting your record expunged. And with that, welcome back to our community.”

The names of the eligible individuals will be available on the Salt Lake DA’s website, and will appear in alphabetical order. 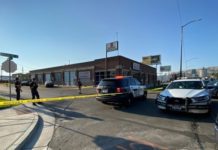