A probable cause statement from the 3rd District Court of Salt Lake City said Israel Jesus Rosales, 20, is facing charges of:

Rosales was involved with a domestic violence incident on March 24, the statement said.

“The evidence shows that Israel Rosales assaulted the pregnant victim with his fists and a pistol,” the statement said. “While they were driving in a vehicle, Israel pulled a small black handgun out of a small red bag and pointed it at the victim.”

He then proceeded to strike her with the handgun in the left side of her face and her arm, the statement said .

“The victim attempted to fight back, which caused Israel to drop the firearm,” it said. “He then began to strike the victim with a closed fist.”

Rosales is a convicted felon and is restricted from possessing a firearm.

“Israel told the victim that he was going to take her to Idaho to kill her and bury her body,” the statement said. “The victim was only able to escape by jumping out of the moving vehicle. After she jumped from the vehicle, Israel yelled at her that if she did not get back into the vehicle, he would kill her. The victim then ran to the nearest home for help and was able to get a citizen to call 911.”

Rosales then left the area. The victim sustained multiple large bruises over her body that were consistent with her account, the statement said.

The suspect was transported to Salt Lake County Jail Wednesday night with his bail set at $40,000. 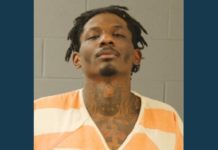