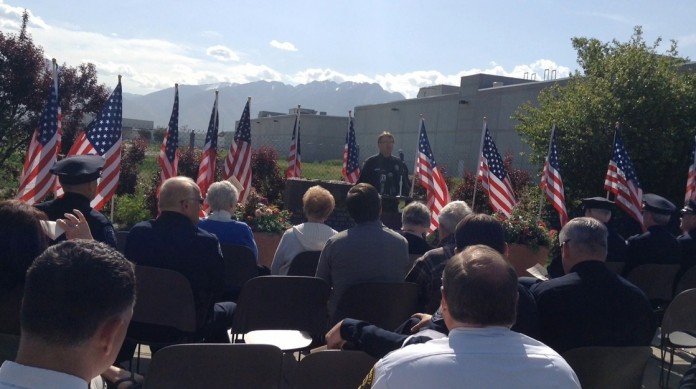 SALT LAKE CITY, UTAH – May 13, 2015 (Gephardt Daily) — A memorial service for fallen officers who gave their lives while protecting the citizens of Salt Lake County was held today.

President of the Salt Lake County Sheriff’s Office Of Mutual Aid Association, Sgt. Jeff Evans welcomed everyone who attended the annual memorial. Evans asked for all of the fallen officer’s family members to stand and be recognized; everyone applauded.

Salt Lake County Sheriff’s Color Guard prepared for the national anthem which was sung by the Riverton High Madrigals that consisted of Matt Huff, Matt Jager, Brevan Lipscomb and Logan Smith. After that the Pledge of Allegiance was initiated by Sgt. Evans. Then there was an invocation by Chaplain Melvin Ward.

Evans said: “This is a terrible loss to families but these fallen officers are not alone, they are among the ranks of thousands of other men and women across the country whose names are carved on the walls of the National Law Enforcement Memorial back in Washington D.C. There are over 20,000 names which are found on those marble walls dedicated to men and women who intentionally put themselves in harm’s way. President John F. Kennedy once said, ‘A nation reveals itself not only by the men it produces but also by the men it honors. The men it remembers.’

“Law enforcement has evolved and progressed significantly over the years. One thing has not changed and that is the good that they have dedicated, the courageous spirit of those who are sworn to serve and protect. If is these everyday heroes who respond to the calls to the citizens who engage society’s ills and great monsters. It is they who put themselves in harm’s way.”

Evans named all the fallen officers whose names are on the monument:

Sheriff James M. Winder spoke about the word “context”; explaining he can never judge a man or a woman who has lived a life that he does not understand.

“The gentleman who is African American, a female, an individual who is American Indian or Asian or gay or lesbian or bisexual, I can never dare to place myself in their context because I have never walked a moment in their shoes and how dare I judge them, and as a law enforcement officer, we must not, we cannot because that is what justice is,” he said. “To look blindly at people and treat them with respect and dignity and that is what we require of our community.”

Everyone stood as Winder and Evans lead in the laying of the wreath, accompanied by a 21 rifle salute presented by the Salt Lake County Sheriff’s Office Honor Guard and Taps by Officer John Clark.

“Amazing Grace” was played on the bagpipes by Sgt. David Glad.