At about 7:45 p.m. Sunday, the hiker reported that he started from the Orson Smith trail head in midday and used the Cherry Creek Logging Trail to summit Lone Peak, a SLCSO SAR news release said.

On the descent, he lost the trail and ended up in the Little Willow drainage.

“He evidently followed Willow Creek downhill for several miles and hours until in thick brush and at dark called 911 for help. His location was estimated to be near the actual Willow Creek at an elevation of 7500’, based on his mobile phone call,” the news release said.

A seven-member team went out from Hidden Valley park in Sandy. They went into Willow Creek as far as possible on the trail and then started “bushwhacking” uphill in the Willow Creek drainage at an elevation of about 6,800 feet, the news release said.

They found the patient around midnight and gave him water, food, warm clothes and a light before heading back down.

With a Utah Department of Public Safety helicopter flying overhead, the team was able to find an easier, faster path, and the team and patient were off the mountain at about 2 a.m. Monday.

SAR had another rescue in Little Cottonwood Canyon at the same time, and expressed thanks to the Department of Public Safety “and their excellent crews for assisting with both missions this night.” 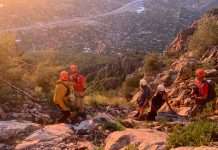 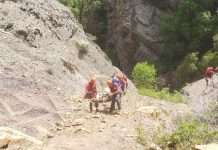 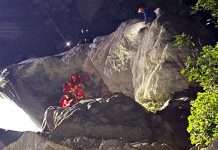