Many staff members tweeted on the subject, including state government and legislative reporter Taylor W. Anderson, who wrote: “That’s over a third of the Salt Lake Tribune’s staff. Ninety four names listed on our staff list when I counted last week. (Robert) Gehrke says 34 out today. I’m thankful my name isn’t on the list, but I’m hurting for those who are.”

Five of the 34 were retirements announced last week, columnist Gehrke tweeted. He added in a tweet: “Supposed to be writing my column for tomorrow but oddly finding it hard to concentrate. Thanks to those who have reached out.”

Salt Lake City mayor Jackie Biskupski tweeted: “This a sad day for Salt Lake City and Utah. Journalists play a vital role in our government. Our hope is all those directly impacted by this decision find a way to continue to serve our community.”

An editor’s note in the newspaper Monday morning from Jennifer Napier-Pierce says: “Today, The Salt Lake Tribune announced staff cuts, forced by the financial realities facing newspapers across the country as print circulation and ad revenue decline at the same time audiences move to digital platforms.

“These staff cuts, and some reductions in print, will help put us on a more stable path. The vast majority of our readers have moved to our website and apps. An upgraded sltrib.com, gains on social media platforms, new ways of digital storytelling and a growing digital subscriber base point to a bright future for The Tribune online.

“Still, we’re not there yet. Laying off talented and dedicated colleagues has been flat-out excruciating and represents a tremendous loss not only for this newsroom, but also for our entire community. Some just started at The Trib. while others have been in the newsroom for decades. Each contributed significantly to our newsgathering firepower. Each departure represents another cause to mourn.”

The layoffs span across disciplines, and include sports writers, arts writers and photographers.

Of those who lost their jobs, BYU sports reporter Jay Drew tweeted: “Friends and followers, after more than 28 years at The Salt Lake Tribune, I received notice today that I am one of the 30-plus employees who has been laid off as part of the newspaper’s massive restructuring. It has been a phenomenal and rewarding ride, but sadly it is over.”

Lynn Worthy, University of Utah sports reporter, tweeted a picture of a box with his belongings inside, writing: “Today was my last day at The Salt Lake Tribune. It seems like it wasn’t that long ago that I unpacked this box at my desk. I don’t regret my time here or making the move to Utah. I’ve met some great people. I feel for the others let go. It’s time to figure out the next step.”

Napier-Pierce’s note continues: “In the face of such challenges, it would be all too easy and justifiable to give up. With fewer numbers, we simply can’t be all things to all people or do things the way we used to. But losing a trusted news source, a Pulitzer Prize-winning independent voice in Utah, is absolutely not an option. Those of us who remain will continue to provide the high-quality journalism you’ve come to expect from The Tribune. We’ll maintain our commitment to watchdog reporting and hold those in power accountable. We’ll bring you thoughtful analysis and commentary to help you make sense of an increasingly confusing world.”

Her note concludes: “Knowing you rely on The Tribune gives us courage to move beyond this terrible day.”

It was announced in April 2016 that Digital First Media was selling The Salt Lake Tribune and its affiliates to Paul Huntsman, son of businessman and philanthropist Jon M. Huntsman, Sr. and brother of former Utah governor and ex-GOP presidential candidate Jon Huntsman, Jr. The sale aimed to secure the long-term viability of The Salt Lake Tribune, a statement at the time said.

The news release at that time said: “Headquartered in downtown Salt Lake City, The Salt Lake Tribune has been Utah’s independent news source since 1871 and covers local and national news, entertainment, sports and weather for the state of Utah. In 2015, the Tribune had an average paid distribution of 74,000 printed newspapers daily, excluding Sunday, making it the highest distributed daily newspaper in Utah. The Tribune also operates an online publication.” The circulation of the newspaper is still listed online as 74,043.

Last year, it was announced The Tribune had won a Pulitzer Prize for local reporting after its yearlong investigation of rapes at Utah colleges. 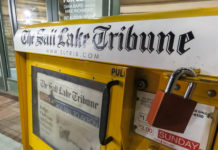 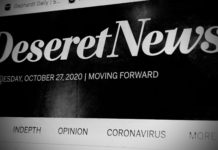