WOODS CROSS, Utah, Oct. 26, 2019 (Gephardt Daily) — The Woods Cross and North Salt Lake police departments are both hoping to identify a man caught on surveillance and wanted for residential burglaries.

The departments, in neighboring cities, each have posted photos, which appear to be the same man wearing the same outfit: faded camouflage pants, a black T-shirt with white lettering on the back, a dark knit cap, and sunglasses with blue frosted lenses.

The Woods Cross police also posted a photo of a small red car believed to have been used by the man. North Salt Lake police posted a file image of a red car that appears to be the same model.

Both departments want to identify the man captured on surveillance.

A photo posted by the North Salt Lake Police Department appears below: 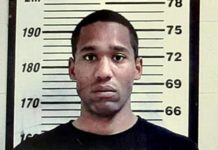 Motorcyclist dies after crash on SR-93 in Woods Cross area