The theft happened at 7 p.m., says a tweet issued by the SCPD. Taken were a pistol laser and pistol flashlight.

The suspects are believed to have been in a VW Jetta with temporary tags and a small hole in rear side passenger window.

The department describes the men as Hispanic and both standing 5 feet 8 inches tall, one weighing 200 pounds and one weighing 250.

Anyone with information on the theft or the names or locations of the men pictured is asked to call the police department at 801-799-3000. 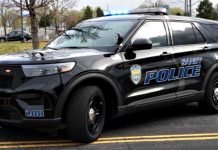