SANDY, Utah, Feb. 25, 2018 (Gephardt Daily) — A residence in Sandy is a total loss after a fire in the early hours of Sunday morning, officials said.

“They took up a defensive position right off the start due to how much involvement there was,” Maxfield said. “There was one person in the home — he had escaped, he was fine. They put water on the fire, were able to knock it down fairly quickly, but it’s going to be a total loss, the extent of the damage is quite a bit.”

There were no injuries in the course of the incident, Maxfield said.

The cause of the fire is under investigation, he added. 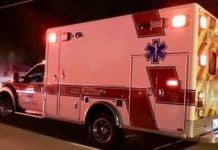