SARATOGA SPRINGS, Utah, April 30, 2019 (Gephardt Daily) — The Saratoga Springs Police Department is asking for the public’s help in identifying or locating the suspects in a rash of criminal activity in the area.

From Monday night into the early morning hours of Tuesday, a group of people in a dark truck vandalized several vehicles, a news release from Saratoga Springs Police Department says.

Police believe the perpetrators were in the Saratoga Springs area from about midnight to 1 a.m., during which time they damaged the vehicles.

Police are asking for video of the suspect vehicle, which was a black or dark-colored four-door, newer pickup truck.

“It is believed there were 3-4 occupants in the suspect truck. We are asking for video to help identify the make, model and plate of the truck,” the news release says.

Anyone who has video that could assist in the investigation, or any information that could be helpful to the police, is asked to call Dispatch at 801-794-3970. 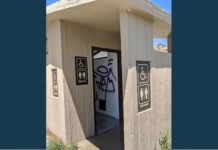