ENOCH, UTAH – August 26, 2015 (Gephardt Daily) – A collision between an Iron County School bus and a drilling rig Wednesday morning forced the rig to flip onto it’s side before coming to a stop.

The bus collided with the rear side area of drill rig causing it to go off the roadway, onto the shoulder and eventually overturn onto it’s side.

The driver of the drill rig did not sustain any injuries. 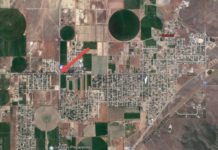 SR-130 closed in Minersville area due to brush fire