“On scene deputies said two brothers, one 17-years-old and the other 14-years-old, were both in kayaks, both were not wearing life jackets, and both were attempting to knock each other out of their kayak,” according to an Iron County Sheriff’s Office social media post Saturday afternoon.

The incident was dispatched at 2:40 p.m.

“It was reported the 14-year-old didn’t know how to swim, and went under in about 10-12 feet of water. At the time 911 was notified, the 14-year-old had been under the water for approximately 10 minutes.” 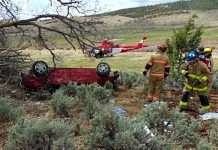