GRANTSVILLE, Utah, March 25, 2020 (Gephardt Daily) — A semi hauling double trailers rolled onto its side in the entrance of the Utah Motorsports Campus late Tuesday night.

Sgt. L. Allred, with the Grantsville Police Department, said the accident on Sheep Lane has closed the road in both directions until about 8 or 9 a.m. Wednesday, while crews clean up several gallons of diesel fuel that spilled when the semi’s fuel tank split.

He said the semi left the road for an unknown reason and hit a drainage ditch. It rolled onto the driver’s side, trapping the driver in the cab.

The first officers to reach the scene broke out the cab’s windshield and pulled the driver out.

Allred said he was told initially that the driver was in good condition, with scrapes and bruises, but he hadn’t had any updates after the man was transported to the hospital. 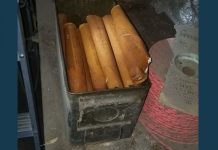 Westbound I-80 closed near Lambs Canyon after semi rollover

No one injured after semi rollover on U.S. Highway 6 in Carbon County