MOAB, Utah, March 10, 2019 (Gephardt Daily) — A semi-truck driver was arrested for multiple drug and DUI offenses after a crash involving his truck on Main Street in Moab Saturday morning.

A news release from Moab Police Department said that at 8:39 a.m. Saturday, police officers responded to the area of Center and Main Street in downtown Moab on a report of a traffic accident involving a semi-truck and a passenger vehicle. The semi-truck was traveling north when it exited its lane of travel and collided with the rear right side of a Subaru in a left-turn lane, causing the Subaru to become disabled and the driver of that vehicle to suffer minor injuries, the news release said.

“Upon contact with the driver of the semi-truck, Donald Ray Vaughn Jr., 46, the officer engaged him in conversation and observed indicators consistent with those exhibited by persons under the influence of drugs,” the news release said. “Based on these observations, the officer conducted Standardized Field Sobriety Tests on Mr. Vaughn, including a portable breath test (PBT).”

Vaughn’s performance during the tests indicated that he was under the influence of intoxicating substances, according to the deputy. The PBT was negative for alcohol, leading the officer to believe that Vaughn was impaired by other illicit substances. Vaughn was detained while the officer continued the investigation.

The officer obtained consent to search the cab of the semi-truck. During the search the officer located baggies containing methamphetamine, black tar heroin, suspected MDMA and several new and used syringes.

Vaughn was then arrested and transported to the Grand County Sheriff’s Office jail facility, where he consented to a urine analysis and a blood draw. Vaughn’s urine tested positive for methamphetamine and MDMA. His blood was collected and will be sent to the crime lab for further analysis.

Vaughn was charged with two counts of possession of a schedule I/II/analog controlled substance, DUI, use or possession of drug paraphernalia and possession of/being under the influence of drugs on duty in a commercial vehicle.

“The Moab City Police Department received significant assistance from the Grand County Attorney’s Office and the Utah Highway Patrol during the investigation of this incident,” the news release concludes. “Officers also worked with the trucking company to ensure minimal delay in delivery of the cargo in the trailer of the involved semi-truck.” 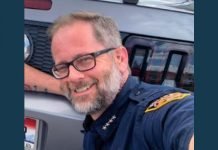