June 21 (UPI) — Senate negotiators have reached a bipartisan agreement on gun legislation, with the text of the new bill to be released “soon” and a procedural vote expected before Wednesday, according to Sen. John Cornyn, R-Texas.

“So soon, very soon, not soon enough for me, but very soon we will see the text of bipartisan legislation that will help keep our children and communities safer,” Cornyn said Tuesday on the Senate floor. “It’s a complicated bill and it’s been a tough negotiation.”

Sen. Chris Murphy, D-Conn., told reporters they are down to the details. “Yeah, I think we’ve reached an agreement,” Murphy said. “We’re dotting the I’s and crossing the T’s right now. I think we’re in good shape.”

Last week, the bipartisan group of senators announced they had agreed on the framework for gun legislation that includes gun restrictions, mental health funding and school security investments in an effort to curb mass shootings, such as last month’s deadly elementary school shooting in Uvalde, Texas where 19 students and two teachers were killed.

The 10 Democrats and 10 Republicans said the package would “protect America’s children, keep our schools safe and reduce the threat of violence across our country.”

Lawmakers have been working for days to turn their negotiations into a specific bill that can get Republican’s filibuster-proof support in time for a vote before the two-week July 4 recess.

Among the sticking points in the negotiations, were the so-called “boyfriend loophole,” which prohibited domestic abusers from buying guns only if they are married or in a longterm relationship with the victim.

“Red Flag” laws, allowing authorities to remove firearms from individuals found to be a threat to themselves or others, were also a source of disagreement.

And negotiators hit a snag over the Hyde Amendment, which bans federal funding for abortions and could potentially conflict with gun law funding for mental health.

Both sides were in agreement to expand mental health services in schools and tighten gun purchasing laws by narrowing the definition of a federally licensed firearms dealer, while requiring a review period of mental health records for anyone under the age of 21.

The gun legislation outline did not include a provision supported by President Joe Biden to raise the minimum age for purchasing semi-automatic rifles from 18 to 21 years old. 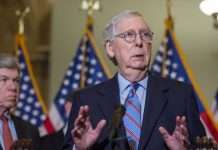