HYRUM, UTAH – August 17, 2015 (Gephardt Daily) – Wells Fargo is offering a $5,000 reward for original information leading to the arrest and conviction of the person who robbed a Wells Fargo Bank in Hyrum.

The robbery happened just before 6 p.m. on July 28 at the bank at 10 West Main Street in Hyrum.

Deputies from the Cache County Sheriff’s Office have not been able to identify the man, hope the reward will encourage others to speak out if they know anything about the incident or the suspect.

Sheriff’s deputies responded to a hold-up alarm at the Wells Fargo that day. Dispatchers were able to reach an employee inside the bank and confirmed that the bank had been robbed and the suspect had left the scene.

Initial investigation confirmed that a single man entered the bank and said he had an explosive device before demanding money from the tellers. Witnesses told deputies the suspect appeared to have a small device in his hand.

The suspect ran from the bank with the device and an undisclosed amount of money. Witnesses were not sure which direction he headed or whether he had a vehicle.

He is described as a white male in his early thirties and approximately 5 feet 5 inches tall with long brown hair and a long handlebar-style mustache. He was wearing a long-sleeve shirt, cargo-style shorts, a wide-brimmed hat and glasses.

The incident has been turned over to investigators from the Cache County Sheriff’s Office with assistance from agents from the FBI’s Salt Lake field office.

Investigators are asking anyone with information that could help track the suspect down to contact the Cache County Sheriff’s Office at 435-755-1032. 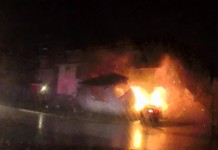