The incident happened just after 1 a.m. on March 17 at 1332 S. State St. A man was badly beaten, stabbed 14 times, and left along the roadway just across the street from the Coachman’s Restaurant. The 24-year-old victim was transported to the hospital in extremely critical condition.

Detectives said there were three male suspects involved, but right now they are looking for the main suspect as seen in the surveillance photos.

All the males were wearing red clothing and claiming to be Blood gang members.

The main suspect is described as an adult black male in his early- to mid-20s, 5-feet-8 inches tall, 200 pounds, with a muscular build. He has very short, black hair, and a goatee with a small strip coming from his sideburns to his goatee.

The suspects drove away in a newer shiny white four-door sedan, with tinted windows, shiny rims and a sunroof.

Anyone who may know the suspects or their whereabouts, or the vehicle they were driving, is asked to call Salt Lake City Police at 801-799-3000.

Anonymous tips may be sent by text to 274637. Please start your text with TIPSLCPD, which routes it to the police department. Reference: case #16-46262. 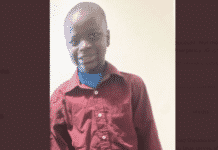 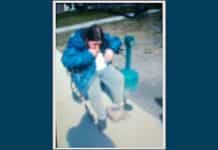