The incident occurred just before 8:40 a.m. Tuesday, when a male victim called police and reported that he had been robbed at gunpoint, the probable cause statement said. The victim reported that he had met a female on the street, hereafter identified as D.C., and went back with D.C. to her apartment at the Georgia Apartments at 2015 S. 200 East “to offer her help she may need.”

Once they arrived at the apartment, the victim reported that a male suspect, later identified as Martinez, was allegedly waiting with a gun pointed at him.

“The A/P (accused person, Martinez), along with D.C., robbed the victim at gunpoint of his property which included his credit card, car keys and cell phone,” the probable cause statement said. “D.C. left the apartment briefly while the A/P held the victim at gunpoint. D.C. went and withdrew $300 from the victim’s bank account at a nearby ATM before returning.”

Martinez and D.C. then left the apartment in the victim’s vehicle, ordering the victim to stay, the statement said. The victim soon after summoned help and called police.

“Officers located D.C. a short time later and she was interviewed by detectives,” the statement said. “Post-Miranda, D.C. informed detectives that she prostitutes herself by offering sex acts for money. D.C. informed detectives that the A/P is her pimp and that he had directed her to take part in a planned robbery in which she would pick up a client on the street, bring him back to the apartment, and that they would rob him at gunpoint of his property and money.”

D.C. admitted to her part in the robbery, the statement said, and located a Ruger 9mm handgun in the glove compartment of the victim’s car and gave it to Martinez. D.C. told officers Martinez “gladly accepted it and remarked that he liked it more than his current firearm he was carrying.”

D.C described Martinez as being manipulative and controlling of things she can and can’t do, and directs her to commit acts of prostitution, the statement said.

Martinez was located a few hours later by officers, and had in his possession the Ruger 9mm handgun that was stolen from the victim, the statement said. Martinez was interviewed by detectives and admitted post-Miranda to his part in the robbery. Martinez denied D.C.’s claim that he is her pimp or forces her to prostitute, but said he “did have knowledge of her doing so.”

Martinez was transported to the Salt Lake County Jail and is being held on $85,000 bail. 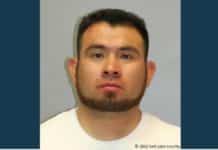 Salt Lake City Police: Man threatens to kill 3 strangers if they don’t buy him beer, then offers them $20