SALT LAKE CITY, Utah, July 27, 2022 (Gephardt Daily) — Police have released the name and some details on the man who allegedly became violent during a Virgin Atlantic flight, causing pilots to land in Salt Lake City so he could be arrested.

“This investigation started at approximately 4:30 p.m. Mountain Time on Tuesday July 26, 2022, when the airport dispatch notified SLCPD’s Airport Division that Virgin Atlantic Flight VS141 was being redirected mid-flight to Salt Lake City International Airport due to an unruly passenger,” the SLCPD statement says.

“After the plane safely landed at SLCIA, SLCPD officers and U.S. Customs and Border Protection met with the flight crew and located William Stephen Hayes, a United Kingdom resident, actively being restrained by passengers and flight staff.”

The statement says preliminary accounts say “Hayes got upset mid-flight and after several attempts by the flight crew to maintain order, he became violent. Flight crew and passengers immediately intervened and restrained Hayes.

“While being restrained, Hayes allegedly assaulted the flight crew and at least one other passenger, which resulted in minor injuries. Hayes also kicked airplane seats and windows. Airline staff found no damage after inspection. Despite some media reports that Hayes attempted to breach the cockpit, the SLCPD cannot confirm that information. The investigation remains ongoing.”

Once Hayes was taken into custody at the Salt Lake City International Airport, the London to Los Angeles flight continued on its flight to California.

Hayes was not injured during the incident, the police statement says. He was transported to the Salt Lake County Metro Jail, where he was booked on a federal detention hold. The investigation, and subsequent prosecution, will be referred to the United States Attorney’s Office. 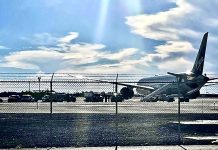