SALT LAKE CITY, Utah, Oct. 15, 2020 (Gephardt Daily) — The Salt Lake City Police Department announced Thursday that in November, it will become the first department in the nation to be certified sensory inclusive.

All of Salt Lake City’s first responders; SLCPD, Salt Lake City Fire Department and 911 dispatch will take part in the training, said a news release from the police department.

“KultureCity’s training will focus on instilling understanding, acceptance, and empathy in the city’s first responders toward those who have sensory needs,” the news release said. “The goal of this training is to enhance future interactions between law enforcement and the community to create the best outcomes.”

Through its training, SLCPD also hopes to highlight its Autism Safe Registry, a voluntary program where people register to provide 911 and officers responding to a call with important information about the needs of the people they may encounter at their address. Any information entered into the database is for use by emergency responders only.

“It is my sincere hope that SLCPD is known for being the best trained and well-equipped department to respond with empathy, compassion, and the necessary skills — particularly when interacting with those who are the most vulnerable,” said Salt Lake City Police Chief Mike Brown. “We want to help in an inclusive way and look forward to working with KultureCity.”

KultureCity will bring a team of occupational therapists, behavior therapists, and other members of the medical community to Salt Lake City in November for the training. The training will consist of one-hour learning sessions which will be followed by testing. Once trained, first responders will retest annually for certification, and new hires will also undergo the training.

“We are very honored and excited to work with the Salt Lake City Police Department,” said Founder and CEO of KultureCity Dr. Julian Maha. “We are appreciative that SLCPD, and specifically Chief Brown, is stepping up to really move his department in a direction of understanding, acceptance, and inclusion of those with invisible disabilities and sensory needs.”

KultureCity’s training focuses on four factors when interacting with people who have sensory needs or invisible disabilities:

KultureCity began its training with a primary focus on entertainment and social venues across the United States. They have since expanded into four other countries around the globe and now work with government, medical and educational facilities. KultureCity has trained over 700 venues on interactions with individuals that have sensory needs or invisible disabilities, including Vivint Arena and the Children’s Museum in Salt Lake City.

“As we work to deepen and diversify the training of our City’s first responders, this KultureCity training provides crucial perspectives and tactics for improving interactions with the people we serve, and taking into account needs we might not be able to see on the surface,” Salt Lake City Mayor Erin Mendenhall said.

“We’re honored to be working with an organization like KultureCity to take this important step in extending our training.”

KultureCity’s first responder training has been through the trial phase, with a test phase completed in Alabama, making SLCPD the first police force to be certified sensory inclusive in the United States once its training is complete. 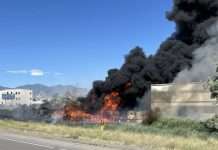