MORGAN COUNTY, Utah, Sept. 5, 2019 (Gephardt Daily) — Two men are dead after the crash of a small plane in Morgan County on Thursday morning.

The men have been identified as Samuel Cortright, 34, and Kenneth Cram, 60. Both are said to reside in other states.

Officials were notified early Thursday that the plane, a Cessna 210, was missing. At 8:30 a.m., a call from a Morgan County landowner led Morgan County Sheriff’s officials to an isolated patch of land near a mountain, Sgt. Craig Tillet, MCSO, told Gephardt Daily.

“We found the two male pilots deceased,” Tillet said. “They worked for a company that checks pipelines on mountain ranges. “It was a wilderness area. We had to hike to it.

“We have notified next of kin to our pilots, but have not released their names yet.”

The location is about three miles west of Henefer, FAA spokesman Rick Breitenfeldt told Gephardt Daily in an email.

Investigators will gather evidence to determine the cause of the crash.

“The FAA and the NTSB will investigate, but the NTSB is the lead agency,” Breitenfeldt’s statement said. 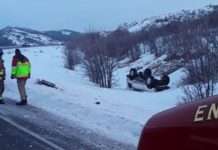