TOPANGA, Calif., July 26, 2022 (Gephardt Daily) — The son of actor/director Tony Dow has confirmed his father’s death a day after it was reported prematurely.

Dow, best known for playing Wally Cleaver on “Leave It to Beaver,” died at age 77. Dow had been placed in hospice care after a battle with cancer.

Members of Dow’s social media account management team posted a notice of his death Tuesday after a miscommunication with Dow’s wife, according to a Facebook post, which has since been removed.

“We have received confirmation from Christopher, Tony’s son, that Tony passed away earlier this morning, with his loving family at his side to see him through this journey,” says a slightly revised Facebook post issued Wednesday.

“We know that the world is collectively saddened by the loss of this incredible man. He gave so much to us all and was loved by so many. One fan said it best: ‘It is rare when there is a person who is so universally loved like Tony,'” the post says, in part.

“Christopher has stated: ‘Although this is a very sad day, I have comfort and peace that he is in a better place. He was the best dad anyone could ask for.”

Jerry Mathers, who played younger brother “Beaver” Cleaver on the 1957 to 1963 sitcom, shared his thoughts on Facebook in a Tuesday post, later deleted, and reposted on Wednesday with a qualifier that Dow’s son, Christopher, had confirmed the death.

“It is with the utmost sadness I learned this morning of my co-star and lifelong friend Tony Dow’s passing,” Mathers wrote. “He was not only my brother on TV, but in many ways in life as well. Tony leaves an empty place in my heart that won’t be filled. He was always the kindest, most generous, gentle, loving, sincere, and humble man, that it was my honor and privilege to be able to share memories together with for 65 years.
“Tony was so grateful for all of the love and support from our fans across the world. My wife Teresa and I send our deepest condolences to his wife Lauren, his family and to all of those who knew and loved him. The world may have lost a star today, but the heavens gained another.”

Dow’s credits show nearly 40 subsequent acting roles, and he also directed on series including “Star Trek: Deep Space Nine” and “Babylon 5.” In 2003, Dow  appeared as a version of himself in the David Spade film “Dickie Roberts: Former Child Star.” 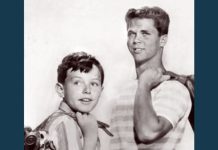