An earlier tweet said as of 2:30 p.m. South Jordan had had four crashes and assisted Utah Highway Patrol with a fifth on the 10600 South southbound offramp. Two were due to speed, one due to bald tires and one due to a bicyclist in the roadway. There were no injuries, the tweet said. 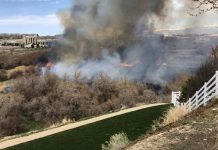