SOUTH JORDAN, Utah, June 4, 2019 (Gephardt Daily) — A South Jordan man was transported by air ambulance to a hospital in Idaho on Tuesday after the pickup truck he was driving collided with a trailer being hauled by a semi on Interstate 84.

A news release from Idaho State Police said the crash occurred shortly before 2:45 p.m., at milepost 229, in Cassia County, Idaho, as Shawn Kamp, 48, of South Jordan, was driving westbound on I-84 in a 2014 Ford F250 pickup truck.

According to the news release, Kamp drove into the rear of a westbound 2015 Freightliner semi pulling a box-style trailer. The driver of the semi was Anthony McCormick, 52, of Nampa, Idaho.

Kamp was transported by air ambulance to Portneuf Medical Center in Pocatello, Idaho. No information on his condition was available Tuesday night.

Both drivers were wearing seatbelts, the news release said.

One lane of I-84 was blocked for approximately three hours. 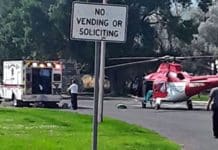 Update: Police ID motorcyclist who died after crash on I-84 in Morgan County

2 Utahns injured in crash on Interstate 15 south of Malad